Alice has one goal: to play for the elite junior hockey team, the Chicago Falcons…even if that means disguising herself as a boy. Things get complicated when she falls for one of her teammates.

Title: Just One of the Boys

Alice Bell has one goal: to play for the elite junior hockey team the Chicago Falcons.

But when she’s passed over at tryouts for being a girl, she’ll do anything to make her dream a reality…even disguising herself as her twin brother. With her amazing skills on the ice, Alice is sure she’ll fit in easily. That is, until she starts falling for one of her teammates…

Hayden Tremblay, star of the Falcons, can’t keep himself out of the penalty box.

Constantly living in the shadow of his older brother, Hayden’s losing his passion for hockey. But when he gets shown up on the ice by the Falcons’ new rookie, Hayden’s determined to teach the kid a thing or two. Little does he guess that “Al’s” surprises on the ice are just the beginning…

Disclaimer: This Entangled Teen Crush title proves that wonderful things can happen when you’re brave enough to go after your dream. Dream hockey player, that is! Warning–a few locker room scenes are included… 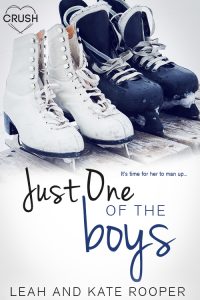